Narcissus and the delusion of self

As the story goes, Narcissus, the son of a river God, was a handsome young fellow who caught sight of his own reflection in a pool of water and fell in love with it, not realising it was merely an image. There are several versions of what happened next, none of which end well for Narcissus: Ovid has him committing suicide when he realises his love can never be addressed, while other tellers say he drowns in the rock pool, or simply wastes away. The basic point is the same… 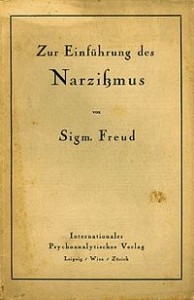 During the early part of the 20th century, psychoanalysts like Otto Rank and Sigmund Freud became interested in the concept. In Freud’s paper ‘On Narcissm’ of 1914 he suggests that what he calls ‘primary narcissism’ is actually a normal part of human nature: the energy that that comprises each person’s survival instincts.

Since this blog is about advaita vedanta, our starting point for an investigation into Narcissus must be that the individual we take ourselves to be does not exist. There is only one thing in this Universe which is Consciousness itself and it is the veiling of this knowledge that is the root cause of all psychological suffering. But what is the nature of this veiling? How is it that pure Consciousness – all that is – takes part in this play as a pure egoless newborn baby, a toddler with a rapidly developing sense of self, an adult with an abiding sense of independent existence and finally, in the case of an awakened mind, a return to knowing itself as Pure Being. Although, on the Absolute level, Consciousness never once does anything but remain itself, there is an apparent forgetting of its own nature and, in some cases, a remembering again. It is this apparent forgetting that seems relevant here. Because the way Consciousness appears to forget itself is with the apparent falling in love with a self Image: one of it’s infinite faces mirrored back at it in the reflective pool of a human form. This gives the Narcissus myth a whole new spin which is that the story tells not of a human falling in love with himself, but Consciousness falling in love with its own creation.

Although neither traditional advaita teachings nor Buddhism make any concession to the existence of a self of any kind, the work of psychiatry and the various therapies of the mind generally take the existence of that self as starting point. Freud’s theory – widely accepted today – is that people are born without a basic sense of self, but through the experiences that occur during infancy and early childhood gain what is known as ego, or a sense of self. Jaques Lacan, a post-Freudian psychoanalyst, took this theory a little further. In 1936 he described how at some time between six and eighteen months, the baby sees its image, generally in a mirror, and realises that what it is seeing is somehow itself. “This recognition causes great confusion as the pre-linguistic infant struggles with its first identity conflict. Crucially, with the boundary-formation of identity comes separation, and the image is perceived as distinct Other. Separation also creates a sense of loss and a lifelong desire to regain the jouissance of the connected wholeness.”(1)

Reading this, I felt a deep resonance with these theories of mind for although Freud, Lacan and all the rest of them go off at wild tangents quite soon after these preliminaries, the sense of a basic separation as the starting point for all human striving comes through very clearly in their work. Lacan is saying “The mirror separates us from our selves. In order to recognize myself, I have to be separate from my self.”(1) He is also saying that once we feel separated from ourselves, we suffer as a result. And that we constantly yearn to return to our original innocence.

This is rich material from the perspective of Advaita or non duality. One might say that when the baby decides that what it sees in the mirror is itself is the moment at which duality arises. And duality – the sense that there is a ‘me’ and a ‘world’ as two distinct things – is synonymous with suffering or in Sanskrit avidya, meaning ignorance or delusion. As soon as one is seperate, one is mortal, with a beginning and an end, and therefore with everything to lose.

The other day I had an interesting conversation with the parent of two young children, who said to me how strange she found it that every time her daughter got upset she had to go and look at herself in the mirror. Another friend agreed with her: she said it had become such a problem in her house that they’d had to tape brown paper over the oven because the child would stand in front of it for ages gazing at itself, especially during moments of distress.

All this fascinates me. Could it be that for young children, whose ego shells are newly formed, the onset of suffering provokes a memory, or some intuitive sense that ‘maybe this body isn’t me after all?’ Staring into the oven door, are they struggling to reconcile the image of what they see with the idea of the ‘me’ which contains their unhappiness?

In my own life, I had a severe car accident some 15 years ago which resulted in severe facial injuries. Bizarrely, the hospital I was put in also followed this practice of covering the mirror with brown paper so that, once I could walk to the bathroom myself, I would not be confronted with the horror of my own image. I can still remember the moment they deemed it safe for me to look again. Staring into the mirror at this absurdly swollen and broken face, there was sense that the face in the mirror was a total stranger. Yet it simultaneously seemed very clear that, despite the accident, ‘I’ was absolutely intact. Years later, after a long journey of discovery through Advaita, I realise that this was perfectly true.